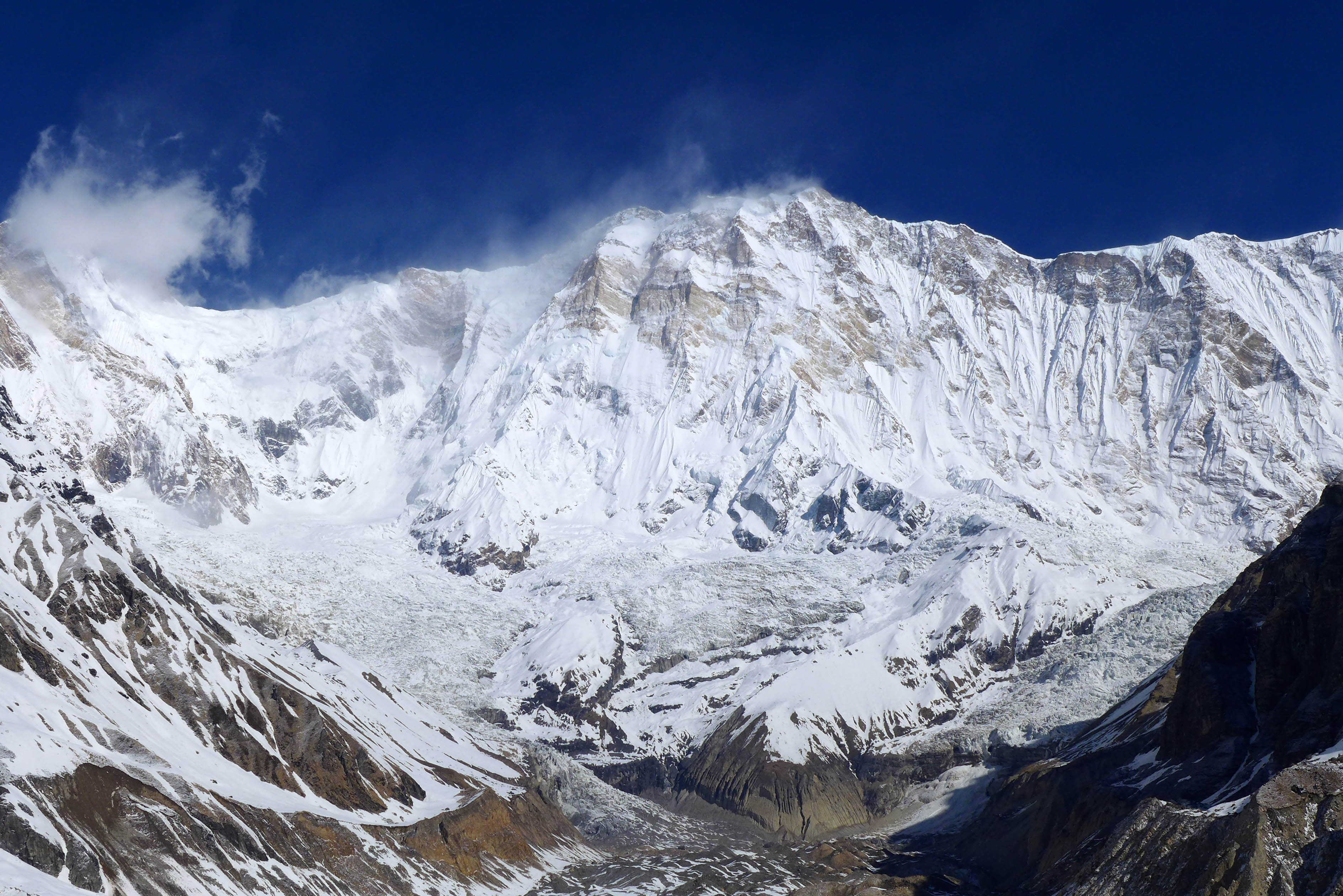 Kurt Schweickhard recently visited Nepal and is sharing this photo showing the impressive view from the base camp of “Annapurna South”.  Considered one of the more difficult peaks to climb, Annapurna is 26,545 ft high.  The Annapurna massive consists of 4 different peaks. A French expedition was the first to climb in 1950.

Legislative Update –
$3 Million Proposal for CBB Mitigation—HB1514:  This bill was introduced by Kona Representative Nicole Lowen.  As originally drafted, the bill provided for a $3 million appropriation to the Hawaii Department of Agriculture (HDOA) for control and mitigation of coffee berry borer (CBB). The KCFA has supported the bill—with a strong recommendation that the appropriation be used to subsidize farmer costs for purchasing Beauvaria bassiana, and that the HDOA directly administer the subsidy program—rather than have the HDOA sub-contract out the program to private organizations. Unfortunately, as the bill progressed through the Legislature, the Honolulu Blenders and their allies testified in favor of major reductions in the proposed $3 million appropriation—see, for example, the written testimony of Jim Wayman (Hawaii Coffee Association/Hawaii CoffeeCompany) and David Bateman (KonaCoffeeCouncil)– http://www.capitol.hawaii.gov/Session2014/Testimony/HB1514_TESTIMONY_AGL-ENE_03-13-14.PDF   On April 29, HB1514 was passed by the House and Senate—BUT with an appropriation of only $500,000.This amounts to a reduction of more the 80% from the appropriation in the original bill. The Legislature has, disappointingly, failed to recognize the serious threat to the continued economic viability of Hawaii-grown coffee posed by the CBB Emergency.  There will be some money for Beauvaria bassiana subsidies in the coming fiscal year, but substantial uncertainty as to future funding.

Roast Coffee Grades/Criminal Penalties— SB2913:  As first introduced, this bill (strongly supported by the Honolulu Blenders and their allies) would have extended as yet unwritten and undisclosed rules for grading of Hawaii-grown roasted coffee—with Class C Felony sanctions for any improper labeling. Testimony from the KCFA, KCFA members and from the Hawaii Farmers Union emphasized that the bill would impose burdensome and unnecessary requirements (and potential criminal penalties) on Kona famers who roast their own coffee in Kona. KCFA also pointed out that, ironically, the bill totally failed to address deceptive and false labeling of foreign-grown coffee in packages using the names “Hawaii”, “Hawaiian”, “Kona” or other Hawaii place names. After the bill was passed by the Senate, the House of Representatives passed a radically amended bill—requiring that the two versions of the bill be considered by a House/Senate Conference Committee.  When that committee failed to reach agreement on a final version, HB2913 died in the committee on April 25.

Revisit the KCFA “100% Kona Coffee” Video
In 2007 the Kona Coffee Farmers Association produced a video with the message for coffee consumers:  “Don’t be fooled by 10% Blends. 100% Kona Coffee is the real deal”.  The video is posted on YouTube:  https://www.youtube.com/watch?v=D8-lKZb64l4

The professionally crafted video is 4 minutes, 15 seconds in length and delivers a clear message that every coffee appreciator should know—“10% Kona Blends are not Kona Coffee”.  There have been more than 19,000 views of this YouTube posting.

All of us are encouraged to revisit (or to view for the first time) this important informational message.  A link from your farm’s website will help to educate your coffee customers and their friends on the importance of carefully reading coffee labels and understanding that just because the package has the word “Kona” prominently and repeatedly placed on the label does not mean that the contents is “Kona Coffee”.
–Submitted by the Branding Committee 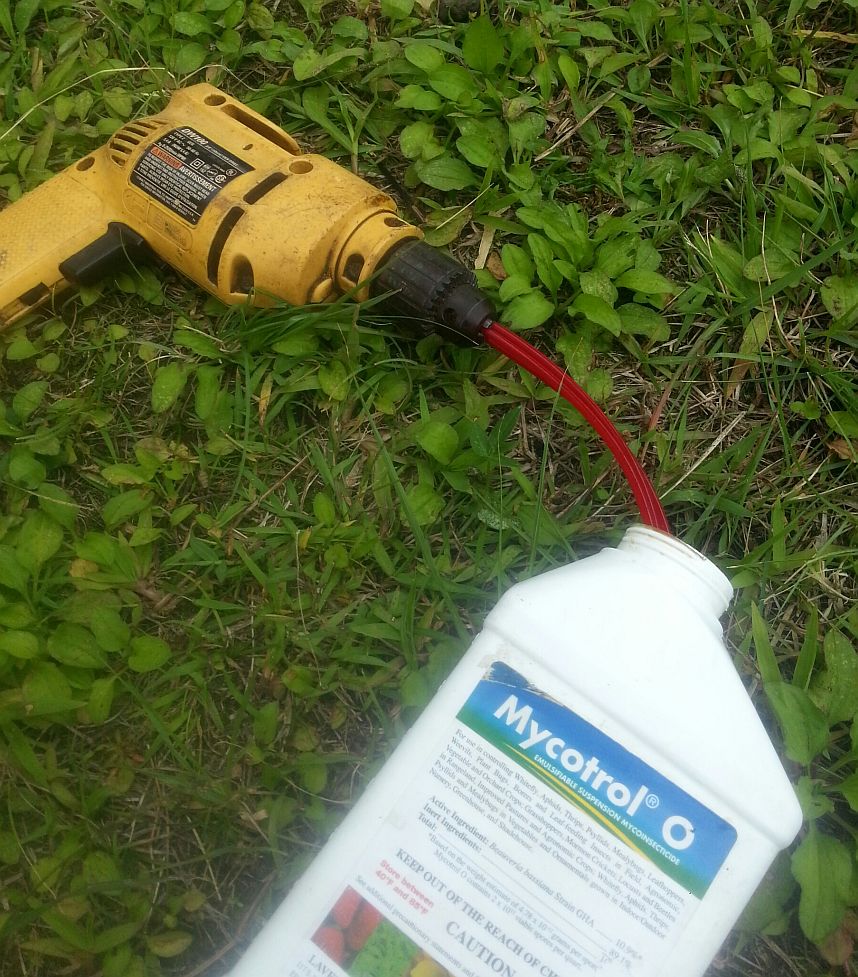 MAKANA O ALOHA – gift of aloha
A handy hint for fellow farmers
When working with Mycotrol it is often difficult to get the sludgy spores off the bottom and into suspension. I like to use a few weed whip strings in a drill to stir things up.
Remove about half of the liquid so it doesn’t slosh out. Insert the strings -I use my hand to cover the remaining hole because it is a little messy. After a good stir, I tilt the bottle to assure there is nothing still stuck to the bottom, then return the rest of the liquid and shake to combine. Happy Spraying.
Submitted by KCFA Member Dan Sullivan

Can Ka’u Coffee be Labeled as “Hawaii Island, extra fancy 100% Kona Coffee”???
According to testimony of a senior HDOA representative the answer is “YES”, if the proposed amendments to Hawaii’s Coffee Standards are adopted.

Under state law (HRS 201M) if an agency’s proposed regulations will affect small businesses (businesses like small coffee farms), the agency must submit a “small business statement” for review by the Small Business Regulatory Review Board (SBRRB).

In the SBRRB’s  March 19, 2014, consideration of the HDOA’s proposed amendments to the current Coffee Standards, the HDOA’s Jeri Kahana, Administrator of the HDOA’s Quality Assurance Division, stated that under the proposed new standards “Ka’u coffee can be labeled as ‘Hawaii Island, extra fancy 100% Kona Coffee’”.  If that is true, the new standards would deal a severe blow to the integrity of Kona coffee.  We already suffer damage to the integrity of our coffee by having State-sanctioned use of the name “Kona” on packages containing 90% non-Kona-grown coffee.  Now apparently we face the prospect of having State-sanctioned use of the “Kona” name on packages containing 0.00% Kona-grown coffee. You can review the comments of the HDOA at the March 19 SBRRB meeting, (Coffee Standards matter may be found on page 3) here: http://dbedt.hawaii.gov/sbrrb/files/2013/03/SBRRBMinutesMarch2014Draft.pdf

KCFA members are encouraged to contact HDOA Chair Scott Enright (scott.enright@hawaii.gov) to request that this labeling issue be further reviewed—along with the many other adverse small business impacts highlighted in the written and in-person testimony given to the HDOA by Kona coffee farmers.
–Submitted by the Branding Committee 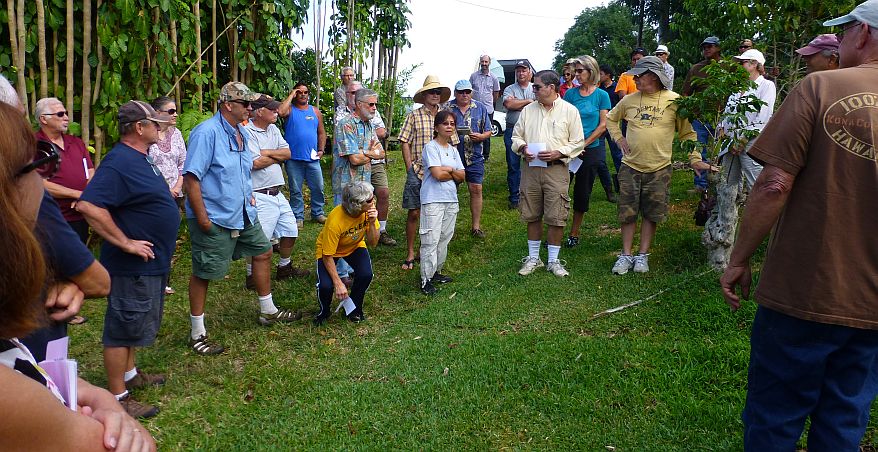 Two KCFA members (Dexter Washburn and Mary Lou Moss) separately alerted the Branding Committee that this new product had been introduced in Trader Joe’s stores. The labeling on the packaging includes the following product description:

“The Kona District of the Big Island of Hawaii is well known for its coffee, grown exclusively along the slopes of two volcanoes and is among the world’s most sought-after premium specialty coffees.  Our Trader Joe’s Chocolate Kona Coffee Truffles bring a bit of that Big Island experience to you by combining the exquisite taste of Kona Coffee and rich chocolate for a divine, one-of-a-kind, melt-in-your-mouth confection.”

Included among the listed ingredients is “Kona Coffee”.  Trader Joe’s representative Jennie Bradley has confirmed that the coffee flavor is derived exclusively from genuine 100% Kona Coffee—not a 10% Kona Blend.

Previously in 2012, Trader Joe’s was awarded an “Honorary Membership” by the KCFA Board of Directors for the introduction of “Trader Joe’s Kona Coffee Shortbread Cookies”—and for offering 100% Kona ground and whole bean coffee to specialty coffee gourmands at its stores.

The Kona Coffee Farmers Association again recognizes and applauds Trader Joe’s dedication to quality and its contribution to expanding the reputation of genuine Kona Coffee as one of the world’s prized specialty coffees.
–Submitted by the Branding Committee

The grant proposal with the title above was submitted to the Hawaii Department of Agriculture (HDOA) on March 25, 2014.   On April 23, 2014 the award notice was sent from Scott Enright, HDOA Chairperson including the following:

• “We are pleased to inform you that your proposal ($136,665) was selected by the Evaluation Committee, and approved by the Chairperson for program funding this year.”

The party in charge (Robert Curtiss) is coordinating efforts to finalize the logistics so that the grant can be carried out starting June 15 as scheduled.

For background, the grant application included the following statements:

• “KCFA will work in partnership with Farm & Garden, Inc. and The Kohala Center, and will work in collaboration with UH-CTAHR, to provide immediate economic relief to coffee farmers, and to reduce the CBB infestation rates in North and South Kona for the 2014 growing season. This will be accomplished by distributing subsidized Beauveria bassiana, making spraying equipment available, and providing education where needed. The longer term impact is recognition by farmers that it is possible to maintain a below 5% CBB infestation rate, and what it will take in terms of fungus cost, equipment, and labor to maintain. The project will cost $273,330 ($136,665 from HDOA) primarily for 1,100 gallons of Beauveria bassiana, and will span June 15 – March 15, 2015.”

• “Coffee Berry Borer beetle (CBB) has not only been economically devastating to the industry and it has proved difficult to get region-wide acceptance of control measures in place. Due to its unique life-cycle, CBB cannot be controlled with a single chemical pesticide. A complete system management approach is effective, yet harder to learn and consistently implement. Despite new costs, managing CBB is an economic benefit to both cherry farmers and to vertically integrated producers.”

Once operational, KCFA member participants in the project will complete an agreement contract form via the KCFA website and will receive needed education and will exchange vouchers for product with matching (“Buy 1, Get 1 Free”) exchanges at Farm & Garden.  Those interested in cooperative spray equipment ownership will complete the form and education required for that part of the project as well.

Watch your email and the website for the official kick off of this project about June 15.  Note that as stated above, participants will purchase Beauveria bassiana, and receive an equal amount for free with limits to total per farm.  Colehour Bondera (colemel@kanalanifarm.org) will be the main contact person for the project.
–Submitted by Colehour Bondera

Kona Heritage
Emmerich Grosch sent Kona coffee to the 1969 international cupping at the Pan American Coffee Institute. The picture below is from the Kona Gazette, a weekly two page newspaper., it states “This is the first time Hawaii’s Kona coffee has received the high award.” Only Kona coffee was served at the Kona Hilton where Emmerich was Food and Beverage Director. Currently, Emmerich is owner of Captain Cook Trading Co. and Hawaii Product Resources.  Thank you Emmerich for your support and promotion of Kona coffee.
–Submitted by Kally Gosckhe 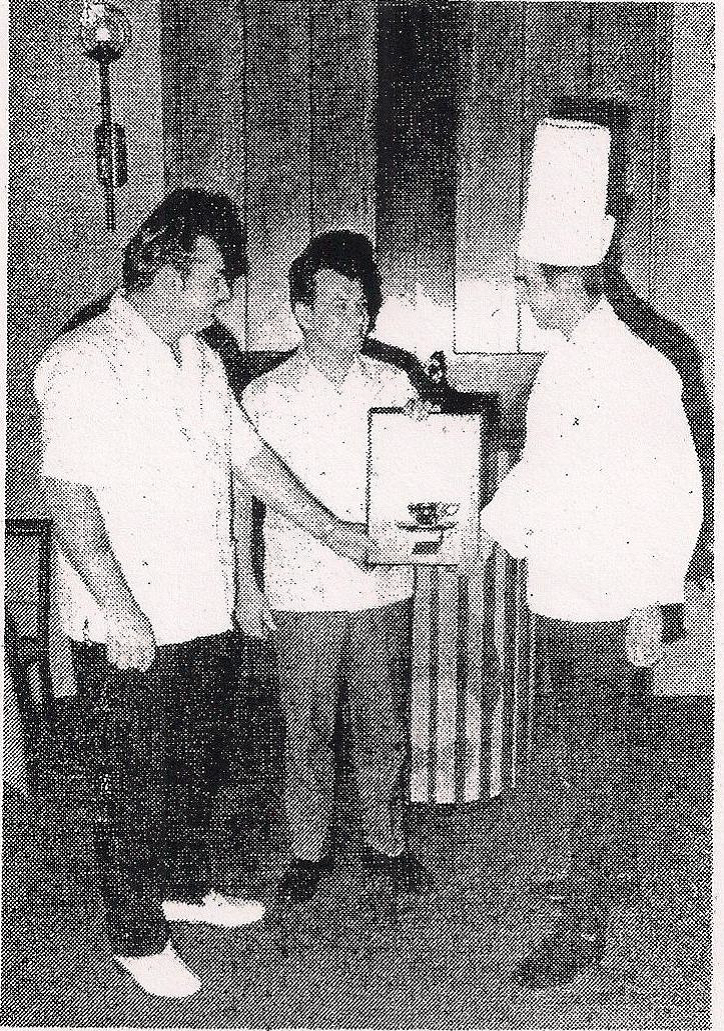 Hurrah!
No Certified Kitchen Required for Roasting and Packing Coffee
Letter sent to Certified/Permitted Roasters on April 8, 2014 from the State Department of Health in Kealakekua says:
This letter is to inform you that pursuant to Hawaii Administrative Rules (HAR), Title 11, Chapter 50, Section 11-50-3 (c)(8), an operation that “…offers only dry not potentially hazardous, not-ready-to-eat foods (such as dry beans, dry grains, coffee beans, teas leaves, or herbs for tea) …” does not require a Food Establishment permit.

This exemption has been interpreted to include the manufacturing processes, including roasting of coffee, drying of tea leaves, and any other operation inherent in the production of your specific food.  Consequently, your current Food Establishment Permit will not be renewed at the time of your current permit expiration.

If you have any questions regarding the permitting of your operation, please contact us at 808-933-0917 (Hilo) or 808-322-1507 (Kona). Sanitarian, West-Hawaii Unit
Hawaii District Health Office
–Submitted by Cecelia Smith

Flour made from Coffee Pulp?
An interesting article recently printed in the Seattle Times is about another possible use for that coffee pulp that many of us recognize as messy stuff that stains our hands.
“A (Seattle) startup backed by Nathan Myhrvold is turning coffee cherry pulp, currently an undesired byproduct of coffee production, into edible flour. Coffee farmers may welcome a potential new source of revenue, but consumers’ reaction has yet to be tested.”

“Mind you, that’s not flour made out of coffee beans, one of the world’s most valuable and widely traded commodities. It’s made by grinding the dried pulp of coffee cherries, the fleshy coverings of the beans, which are usually thrown out.  The resulting product can be baked into bread, cakes and doughnuts, said Dan Belliveau, a former director of technical services at Starbucks and now the founder of CF Global Holdings, the company behind the effort.”
“Coffee flour can’t be found on the shelves yet. Belliveau said the company expects to produce between 350,000 and 400,000 pounds of flour this year, and 2 to 3 million pounds in 2015. That’s when it expects to launch its products.”
“Currently CF Global is turning coffee pulp into flour in Mexico, Guatemala, Nicaragua and Vietnam.” For the entire article, check this link
http://seattletimes.com/html/businesstechnology/2023296588_coffeeflourxml.html

Photo Credit
In the March Independent Voice, an article about coffee farmers and ohi’a forest included the following picture without including the credit.  Apologies for that error. 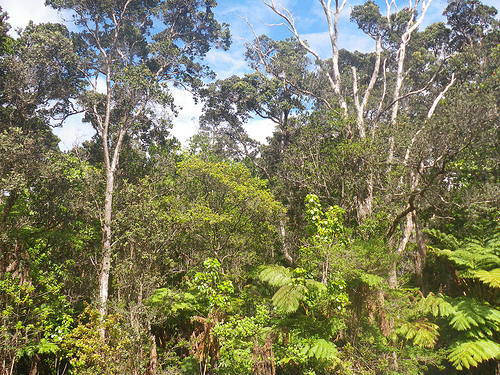